The day was like most days, full of compelling things, distractions, and obligations, when a message came in the way they do nowadays, with the force of an urgent need. It was a Facebook message on a Saturday. Can someone please help? People had moved and left a puppy… Sometimes it is just the right time to do a good thing, and so an everyday woman left the demands of her day and responded to the call.

The small black and red creature felt like a newborn fawn in her arms as she lifted him out of the mud. He was leggier than he’d first appeared sitting hunched and boney, trying desperately to disappear into his own emaciated frame. A black harness, open at the girth, secured the pup to a fence. Once unfastened, the pup was free of the fence, but the harness strap had grown into the puppy’s flesh under his foreleg with the foul smell of infection – evidence that the harness would have to be cut off.   She placed him carefully on a blanket on the passenger seat of her truck and he watched her the entire time she drove. She glanced over often. She spoke with quiet reassurance. He lay on his side, head against the door, and watched. She named him Oliver. 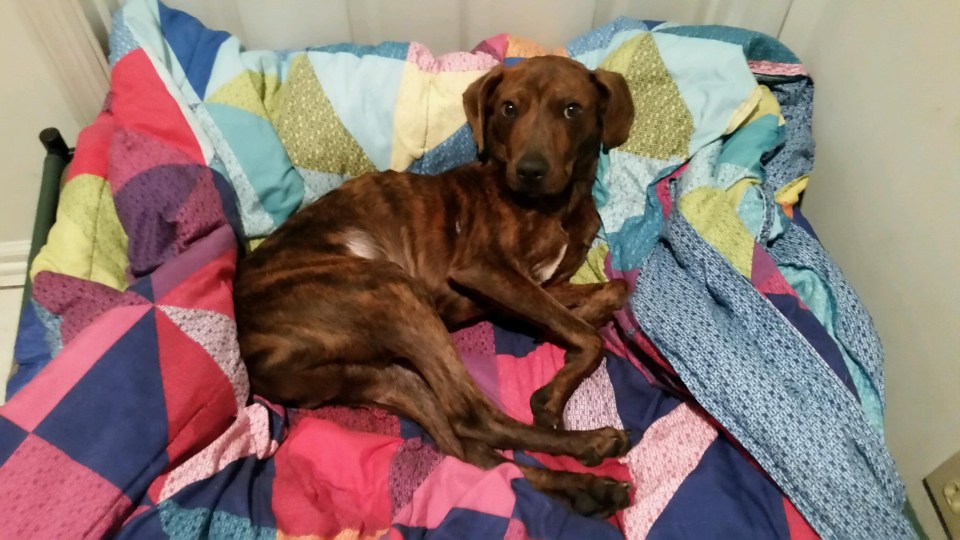 Oliver in the beginning

In the beginning, Oliver had a large elevated dog bed filled with soft clean quilts. In the beginning, Oliver did not need to move much more than his head each time small nutritious meals were placed beside him. She made a video when he first wagged the end of his tail. Then the pup moved to drink and to use the newspapers at the end of his pen, and she began to leave his food next to the water bowl. In the beginning, it was as if the miracles of food, water, safety and comfort were apparitions to a small creature for whom survival had been a questionable blessing. 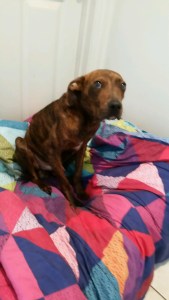 Twenty-four hours later, Oliver had developed enough confidence in the abundance that surrounded him to choose his own human, and a surprising choice it was. He did not choose the bearer of food and water, the one who ministered to his wound and maintained the cleanliness of his space. He was not concerned when she left his sight, nor did he delight in her presence. He did not cry if she moved through a door without him, nor did he sit and stare at the door until she returned. He chose the man, her husband, the one who had let him curl under his desk for a couple of hours that Sunday, with the sporting noise on the TV and the reassuring smell of a man’s feet. When the man napped, Oliver napped on his chest; when the man moved, Oliver followed as far as the man would allow. And Oliver quickly learned that when they went through the front door together, he made his man very happy if he peed and pooped.
A few days later, Oliver’s wound from the ingrown harness was surgically repaired, and for nearly two weeks he pranced around behind his man with the e-collar wagging – a bell with a tiny hound-faced clapper. His joy in life was not to be diminished by such an innocuous contraption, not after what he had been through.

“Because of a dog’s joyfulness, our own is increased,” says poet Mary Oliver in the opening quote. But the joy of a dog that started his life in the mud, without enough food or clean water, as its small malnourished body sustained every known southern parasite; the joy of a dog as it experiences the abundance of safety, sustenance and love; hikes, toys, rides and companions; the sights and sounds of family, is a joy that only rescue can offer. It is the joy of gratitude, the awareness of miracles. Living with that depth of joy is to be wrapped in the loving embrace of Creation. 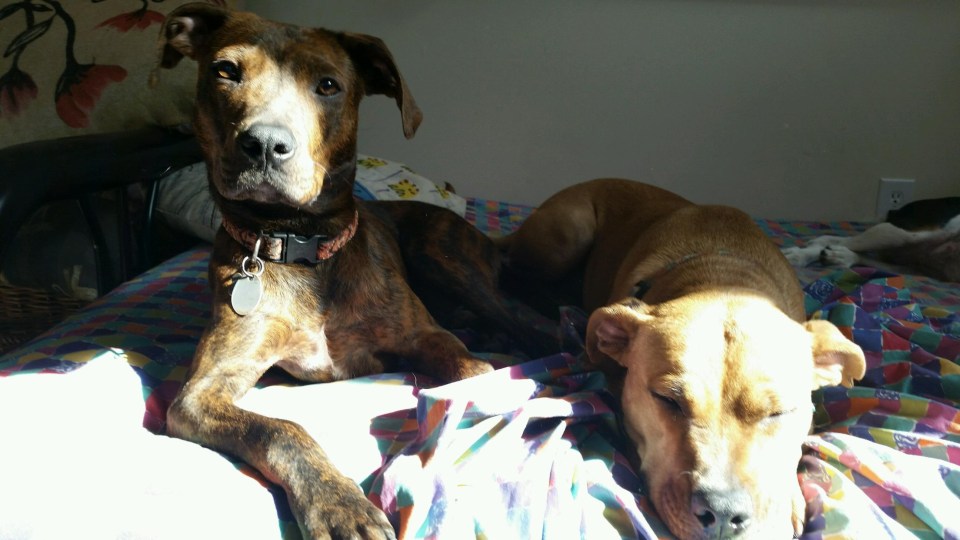 On Saturday, February 20, PAWS will sponsor Bully 4 You & Other PAWS Too first adoption event at Tractor Supply on Whiskey Road in Aiken from 10 am to 2 pm. Bully 4 You will be joined by fostered adoptables from Molly’s Militia. Each of the dogs available for adoption has its own story, many much like Oliver’s. These rescue programs are proud to offer these special dogs with no additional charge for the depth of the joy they will bring a deserving family. Seeing is believing. Please plan to stop by. Maybe you have a role to play in their future. Buy a hat or shirt. Consider making a contribution to the worthy efforts that may one day offer you or someone you know that perfect dog. (Click here to see some of the adoptable dogs that will be on hand.)

In so doing, we spread the miracle of rescue dog love. There is nothing like it.

As for Oliver, he has charmed his way into the heart and home of a man whose wife always seemed to star in their canine productions, always, that is, until Oliver. The dog that was meant for you will find you, if that dog gets the right help along the way. Try it.

A retired organizational problem-solver and radical educator, Joya Jiménez DiStefano is an artist, Servant Leader, and co-founder of FOTAS and founder of PAWS, Inc.